On 30 January 2016 an attemp was made to break the Kite Surfing world record that was held by Spain at Blouberg Beach, Cape Town. Â The previous record was 353 kiters which was broken with the new record now standing at 415 kitters.

It was a perfect sunny windy day with perfect conditions for the kitters.

At 1pm the 400 plus kitters set off from the beach in front of Dophin Beach hotel up to Doodles restuarant, a stretch of about 1km. Â When all was counted and verified, 415 kitters were in the air/on the water at the same time.

More abour the event and the world record can be read on News24 and Traveller24.

One of my favourite catoonists is Jeremy Nell and today he hit the nail on the head when it came to how my head is feeling.

I just hate this damn vuvuzelas after being awaken at 6 am when somebody decided it is cool to wake up the whole neighbourhood.

I get goosebumps everytime I listen to this:

This picture, table say it all …

Came across this on a Aussie blog:

One must now come to terms with the fact that they are now a member of the 2nd best cricketing nation in the world. Some marketing slogans may have to change.

He was obviously talking about the Australian cricket team. Eat your hearts out Australia and in a couple of weeks you will also be number 2 in the 5 day game.  And I loved one of the comments to the post.

Haha. Let’s face it, Australia got walked over.

The obvious solution is to ban RSA from international cricket again. 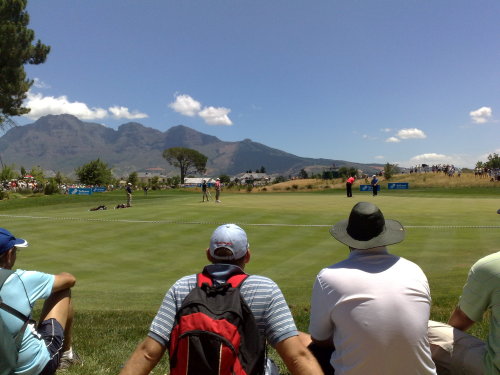 My son and I spend the day at Pearl Valley yesterday watching the pro golfers at their game.  Congratulations to Richard Sterne who won the South African Open.  He definitely did not have a bad 2 pay weeks by also winning the previous week.  Just under R5 million rand in 2 weeks .. not bad going.

Unfortunately I did not get a photo of Richard but got one of Retief, who we followed most of the day. 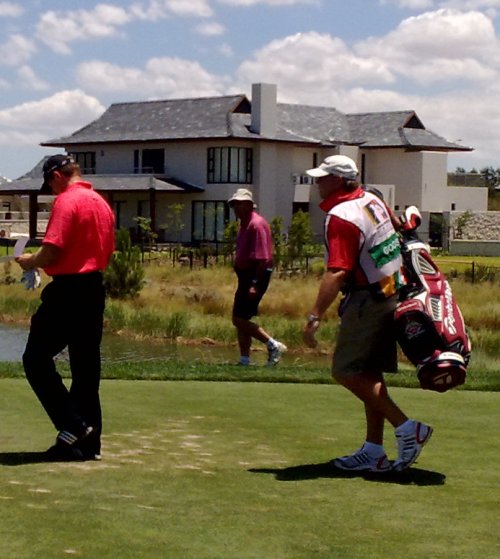 I played at Pearl Valley about a month ago and must say that I think it is one of the best Golf Estates out there.  Now I only need a couple of millions to buy a house there and become a member :).

Ernie had one of his typical tournaments, 3 good rounds and one crap one.  Ernie, what is going on … ?

This is probably my last blog entry for 2009.  It was really a shitty year which I do not want to have over again.  2009 can only be better and I am looking forward to it.  To all of you that has bothered to read, thanks and have a great Christmas period, if you celebrate it, and may 2009 be a great year.

Till next time when we meet in the cyber world or face to face. 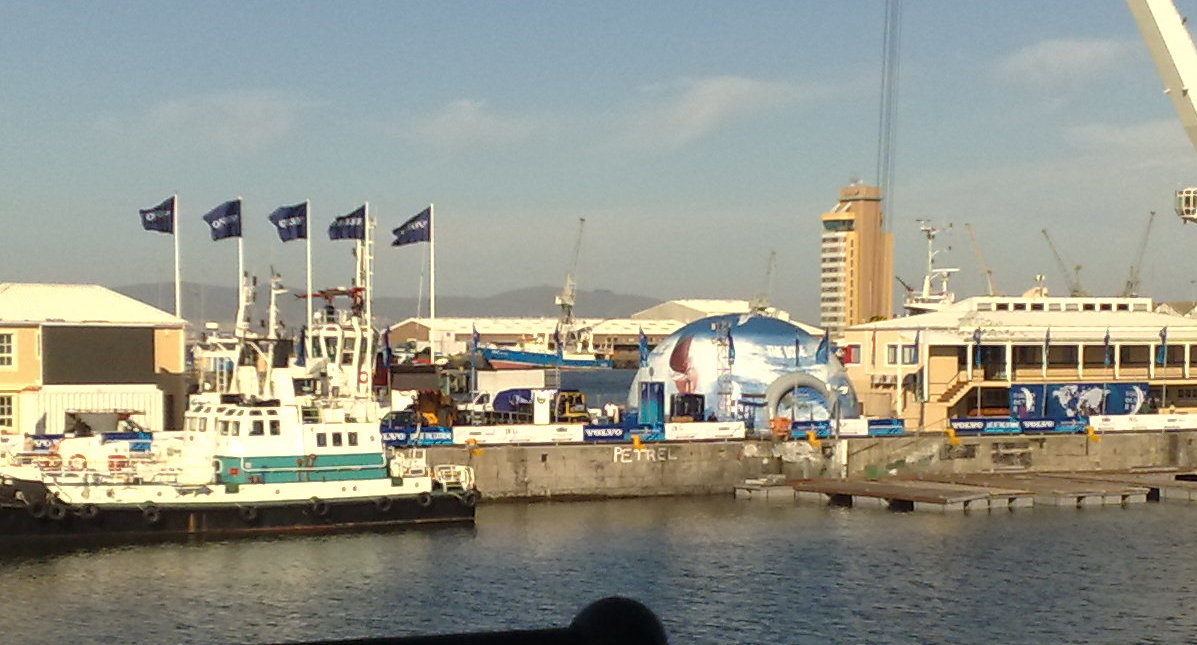 The Volvo Ocean Race is currently on the go.  The yachts left Alicante in Spain on 11 October on its way to Cape Town.  The next leg will leave Cape Town on 15 November and ends in Kochi, Singapore.

The above photo was taken in the Cape Town Waterfront and the blue flags in the photograph is the Volvo Ocean Race flags. 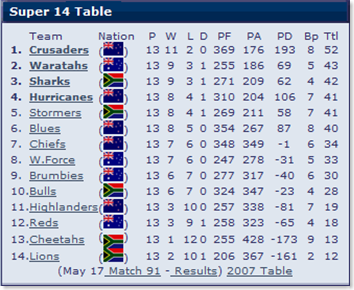 What were they thinking, and here I am talking about that 15 Stormers that were on the field yesterday.  What a bunch of wallies … I have not seen a bunch of guys that for 80 minutes had no idea what they were doing.  On yesterday’s performance they do not deserve to be in the semi’s.

Well done to the Sharks that showed how it should be done.  Good luck to them and let us all go out and support them next weekend against the Waratahs.

Over the past week, I have spend 3 glorious days in Sun City courtesy of IBM for great work delivered during 2007.  I was one of the lucky one’s that stayed in the Cascades hotel and what a joy.  I was not like Tertia and spend basically all my allowance provided by IBM. Went on a game drive early on the first morning and almost froze to death but what a great drive.  Got to know a elephant … the driver had to quickly start the vehicle and move away so close the elephant got.  Also was treated to a baby white rino, “rooikat”, zebra, giraffe, impala and various other wildlife.  Unfortunately we did not get to see lions or cheetahs. Went on a walk through the Sun City forest over hang bridges and through waterfalls.  The photo above is from behind the waterfall.  Bet you did not know you can walk behind waterfalls in Sun City. 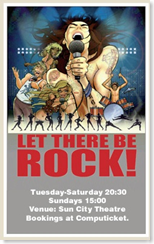 On the first evening we went to watch the show, Let There be Rock, and I thoroughly enjoyed it.  One pity is that they played no Queen music which was a bit weird since I cannot see how you can have a Rock music show without Queen.

Both evenings we had gala dinners and on the second evening people partied till in the wee hours of the morning. I was not that brave 🙂

Lounged around the pool, sipping cocktails and beers.  Spending time with friends.  Just had a great 3 days away from the office and did not had to worry about work and all the other things that is going on in my life.  Thanks IBM, I really enjoyed it and appreciate the gesture.

A friend of mine will be spending the next week there on a conference.  M, if you read this, take some time out from the hectic conference life and just enjoy some of what Sun City has to offer.

You can see all the Sun City photos on my Flickr stream.

Today is full moon and it poked its head over the mountains fairly early today.  Here is what I captured with my cellphone – excuse the quality. 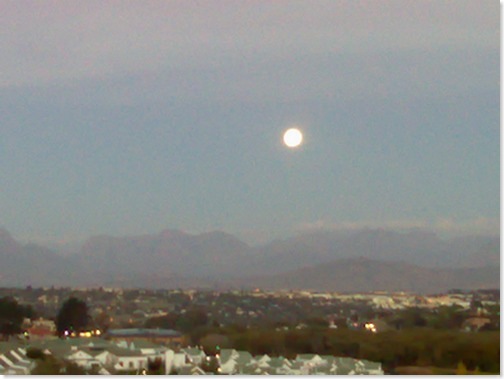 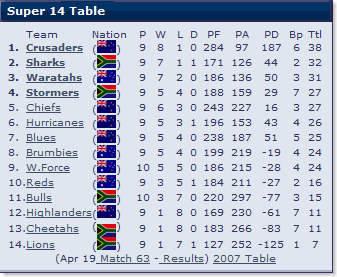 Over the last couple of days I have been thinking about friendship and relationships and all that I am left with are more questions than answers. 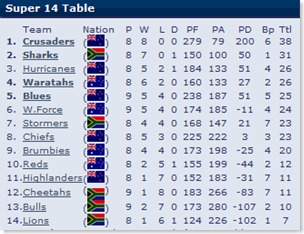