Yes, I know, this blog was dead for more than a year and there was many reasons for it which is not really important.

So what has happened since then:

This is it for now while I go and get my packing done.Â

What a year, one that I do not want to have over.  This must have been the busiest year in my 31 year working live.  I have never work this hard with the accompanied stress levels that goes with it.

The year started off for me starting a job at Old Mutual for the first 6 months of the year.  It was one of the most interesting projects that I have managed with a great team of developers.  However for some reason Old Mutual decided to treat us contractors not to well and it was time to move on.

I am Project Manager for 5 countries in the Southern part of Africa.  During Novemeber I spend a couple of days in Uganda to visit and meet the people in Uganda.  I must stay that the past 6 months was very hard and is starting to take it’s toll on me.  I am extremely tired and the frustration levels are very high.  Not sure how long I will be able to keep this up.

On the family side.  My daughter completed her second year at varsity and moves on to 3rd year next year.  My son has one little subject to complete at the beginning of 2012 and if everything goes according to plan, he will obtain his Chemical Engineering degree in March 2012.  Now the struggle starts for him to find a job, so if anybody knows of Chemical Engineering jobs, then please let me know.

I have not blogged in a while and it was mainly due to not having much time.  My new job is just hectic and I just did not have the time and energy to blog.

This say it all: Only difference in my case is that it was not just one day but about a month and a half. I will return eventually .. I know you miss me 🙂

This is just a test blog entry to test posting something from Google Chrome using ScribeFire.

This Blog will be moving from it’s current home to a new home over the next week or so.  So if you happen to be the 1 or 2 people that is reading my blog and cannot find it then you know why.

The server where I am currently hosting is just getting too unreliable and I think it is a good time to move to my Dreamhost server where my other blog is already hosted.

PS. If you happen to host with or planning to host with SAHOSTPLUS.COM then please re-consider.  Their support is non-existant when something goes wrong.

According to Twittersheep my followers talk about: 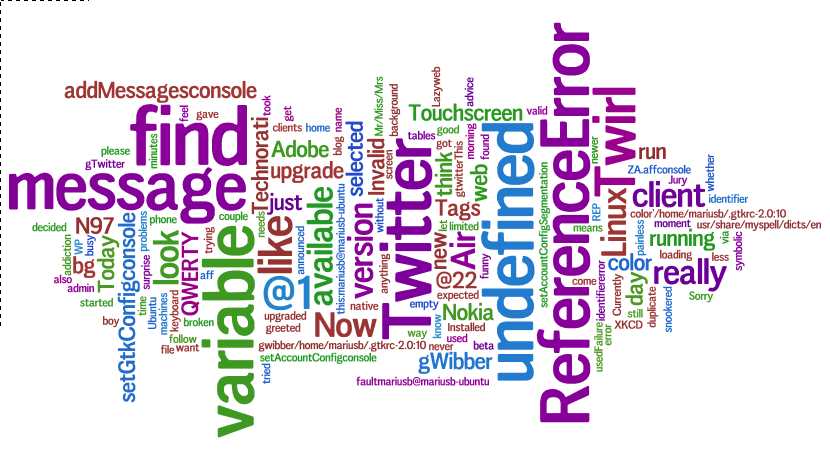 As can be seen, currently my main issue is with Twitter and the errors I am encountering on Ubuntu.

This was done with Wordle … a creation by one of my IBM colleagues.

A colleague, IBMer Luis Suarez, wrote an article in the NYtimes on how he is using Social Networking tools to reduce the use of e-mail.  And I quote

E-mail can become extinct, if not repurposed altogether, even at big companies like I.B.M. An e-mail in-box no longer needs to be like Pandora’s box.

I am not sure whether I totally agree with this … there is still a place for e-mail.  As another IBMer Ed Brill say and I quote

Even if you move all of your collaboration to other tools, there still needs to be a prompt, a push, a tickle, an alert … something that draws you into the collaboration.

How embarrassing can Facebook be .. well a lot when one does not look what one does.  All these apps does not behave the same and can confuse one when you are not on the lookout.

Over the weekend somebody (rather not say who) send me a Superwall picture.  It was one of those picture one would not generally show around — you know what I am talking about.  Before deleting it, I decided to send it to one of my friends.  Not knowing that when selecting Forward in Superwall it selects all friends by default,  I unselected the friend I wanted to send the picture to and Forwarded it.

After I hit the Forward button, I noticed to my horror that I forwarded the dreaded picture to all my Friends.  Luckily one receive a notification of who all received the forwarded post and this allowed me to delete most of the forwarded pictures.

I know I did not managed to delete all and if you are one of those that got the picture before I deleted it, then sorry if it embarrassed you.  It was a real boo-boo on my part and I apologize.

Lesson I learned the hard way.  So be careful what you do on Facebook.