Tidbits from my RSS reader: What a last Formula 1 GP held in Brazil yesterday.  Kimi won the race with Alonso 4th and Hamilton 7th.  This gave Kimi enough points to win the World Championship by 1 point.  But did he win?  There is some dispute about the fuel temperature of BMW Sauber and Williams.  These teams were cleared but I am sure that McLaren will appeal this.  If the appeal is successful then Hamilton will move up to forth and have enough points to take the championship.  Waiting with abated breath to see how this will pan out.

Onto my RSS feed tidbits:

The V&A waterfront in Cape Town with the bay and Blouberg in the distance: How great was the win against Argentina last night?  Next week we can give the Poms a lesson in rugby again.  So my prediction was not spot on but I really do not care who we play in the final.  The main thing is that we there and that we will win it.

I have eventually cleared out all the backed up RSS entries in my feed reader.  Here is some interesting tidbits:

With summer getting nearer and just being a patriotic South African and Cape Townian.  How can one not love this place.

So South Africa had their first game. All in all, it was not bad at all.  Samoa played a very spoiling game and I think South Africa probably played as well as they were allowed to play.

I just finished watching the Namibia, Ireland game and how impressed was I with the Namibians.  They made a lot of friends tonight.  The score flattered Ireland.  If one take away the penalty try and the last try from Ireland, which was not a try, then there was nothing in the score.  And it was nice to see a Bock playing in the World Cup.  The wing for Namibia is Heini Bock, no not family.

Onto my feed items for today. Hope all of you worn your casual day stickers and contributed your bit.

Today is also the start of the Rugby World Cup being held in France.  As a patriotic South African I do support the Boks … good luck to them and I honestly think they have the team to bring the cup back.

Now for my feed entries:

One of Jupiters icy moons — Europa: It is Blog day today so I have to blog.  From my RSS Feed reader today: I am back with another update after a hectic week back at week.  Why does everything come to a standstill when one goes on leave?

So here it is:

It is flower season in the Northern Cape so some flower beauty for you. Click on the image for some more photos and information. 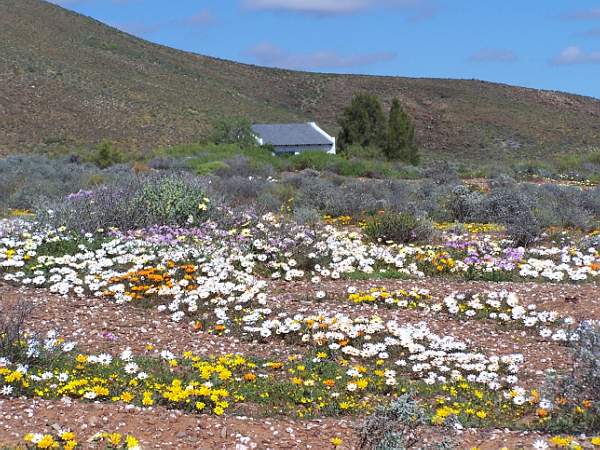 It is a glorious sunny day in Cape Town so before I hit the road, something to keep you busy for the day. First, the Amatomu flash ribbon display the wrong ranking on my site (This has now been fixed). Here is what is displayed at the moment

and this is the actual ranking

. Anybody else has the same problem?

On to today’s tidbits:

To go with the Perfect City Challenge — Cape Town from Robben Island.